Visit Oswiecim, city of Poland, by joining a Guided Tour of Auschwitz among those proposed by the authorized local guides of Evolved Guide.

Oswiecim is known all over the world as Auschwitz (as it is called in German). Auschwitz is famous for the Auschwitz Concentration Camp and the Birkenau Extermination Camp, both built during the second world war by Germans. Today they’re recognized as a UNESCO World Heritage Site.

Enter the Auschwitz-Birkenau State Museum and get to know the tragic history of the Holocaust, which is the genocide committed by Nazi Germany and its allies against the Jews of Europe, their political opponents, ethnic minorities, homosexuals, the handicapped people and all those who were considered "inferior" for political or racial reasons.

Those who come to visit Auschwitz usually join a private walking tour of the Auschwitz-Birkenau State Museum so as to get to know the history of one of the greatest crimes of humanity and visit gas chambers and crematoriums, watchtowers, barracks, railway ramps together with an authorized local guide.

Choose Evolved Guide, the only platform where all the guided tours in Auschwitz are customized by our tour guides. Choose the tour depending on the itinerary, duration, departure time, price and offers. Evaluate the various proposals of our tour guides and choose the option that's right for you! Come home with a unique memory of the private tour of Auschwitz thanks to the Evolved-Guide Authorized Private Guide.

Most requested Tours of Auschwitz 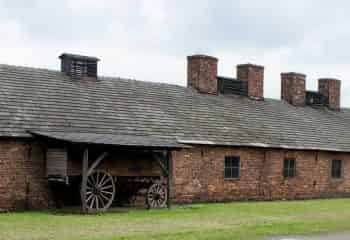