Visit Bologna, the main city of Emilia Romagna by joining a Guided Tour of Bologna among those proposed by the authorized local guides of Evolved Guide.

The first settlements of the city date back to the first millennium BC, a period in which Bologna turned out to be an important urban center first under the Etruscans and the Celts, then under the Romans. It became a free municipality in the Middle Ages. It was also the northern capital of the Papal States and an important center of the Resistance during the Second World War.

Known for its towers and arcades, Bologna has a very large historical center. A considerable number of tourists from all over the world come to visit Bologna every year, not only for the tagliatelle pasta with meat sauce or the tortellini in broth, but also for its enchanting main attractions.

A private walking tour is a good choice if you want to visit the most important monuments of Bologna in a day. Let an authorized local walk along the main attractions of the city with you.

There’s no need to move from a place to another: the historic center has plenty of monuments. Only in Piazza Maggiore, the main square of the city, you can see medieval and Renaissance arcades and buildings such as Palazzo d'Accursio, the Fountain of Neptune and the Basilica of San Petronio.

Choose Evolved Guide, the only platform where all the guided tours in Bologna are customized by our tour guides. Choose the tour depending on the itinerary, duration, departure time, price and offers. Evaluate the various proposals of our tour guides and choose the option that's right for you! Come home with a unique memory of the private tour of Bologna thanks to the Evolved-Guide Authorized Private Guide.

Most requested Tours of Bologna 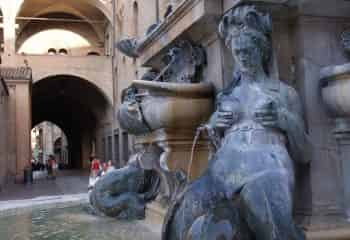 Discover Bologna by joining the Bologna Walking Tour and learn more about the history of the city thanks to the commentary from an authorized local guide. Bologna is the main city >>
Starting from 0,00 €
Price per person 0,00 €