Visit Caserta by joining a Guided Tour of Caserta among those proposed by the authorized local guides of Evolved Guide.

Caserta is a city in Campania known for its famous Bourbon Palace. Also known as the Versailles of Italy, the aforementioned Royal Palace of Caserta is a UNESCO World Heritage Site since 1997.

Like many Italian cities, Caserta has ancient origins. The area where the palace was built is a natural territory of archaeological importance where Osci, Samnites and Romans left traces of their presence. A few years ago, some tombs belonging to the Samnite era were found in the basement of the Royal Palace. It was therefore a necropolis of the fifth century BC. It took the name of Calatia when it was populated by the Samnites. It later passed into the hands of the Romans.

The State of Caserta belonged to the Acquaviva family until the family went into debt, and was forced to sell the possessions to the Bourbons of Naples. Charles III was the one who decided to build the Bourbon palace. They started construct the building in 1705.

The Royal Palace of Caserta is the largest royal palace in the world by volume. Tourists from all over the world come to Caserta to visit it. Many opt for a private walking tour, so that they can recognize and contextualize what they see thanks to the explanation of an authorized local guide.

Choose Evolved Guide, the only platform where all the guided tours in Caserta are customized by our tour guides. Choose the tour depending on the itinerary, duration, departure time, price and offers. Evaluate the various proposals of our tour guides and choose the option that's right for you! Come home with a unique memory of the private tour of Caserta thanks to the Evolved-Guide Authorized Private Guide.

Most requested Tours of Caserta 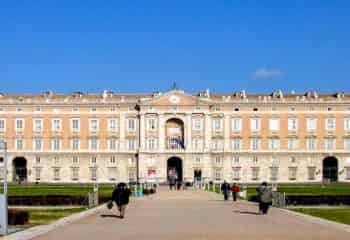