Visit Herculaneum, a city in Campania, by joining a Guided Tour of Herculaneum among those proposed by the authorized local guides of Evolved Guide.

Herculaneum is known all over the world for the Archaeological Excavations of the Roman City, whose legend tells that it was founded by Hercules itself. After the eruption of Vesuvius in 79 AD Herculaneum was destroyed, or rather, covered with a blanket of lava and lapilli, just like Pompeii. There’s a road of Herculaneum which leads directly to the Vesuvius cone.

The first excavations were started by Prince Emmanuel Maurice de Lorraine in 1709. Crossing wells and tunnels they reached the Theater of Herculaneum and found some finds such as statues, marble, columns. The first systematic excavations took place during the time of King Charles III of Bourbon. Meanwhile in Europe the city of Herculaneum became increasingly known, giving impetus to the cultural movement of Neoclassicism, and to the need of the English aristocracy to carry out the Grand Tour of Europe.

The Archaeological Excavations of Herculaneum are one of the most visited ruins in Italy: It’s visited by three hundred thousand tourists every year. In 1997 they became part of the UNESCO World Heritage List. A private walking tour inside the ruins is undoubtedly the best choice to make when visiting the Archaeological Site of Herculaneum, especially when your tour guide is an authorized local guide.

The city of Herculaneum is also famous for the Golden Mile, a road that goes from the archaeological excavations to Torre del Greco, where you can still admire splendid 18th-century villas, which once were the summer homes of the aristocrats of the past.

Choose Evolved Guide, the only platform where all the guided tours in Herculaneum are customized by our tour guides. Choose the tour depending on the itinerary, duration, departure time, price and offers. Evaluate the various proposals of our tour guides and choose the option that's right for you! Come home with a unique memory of the private tour of Herculaneum thanks to the Evolved-Guide Authorized Private Guide.

Most requested Tours of Herculaneum 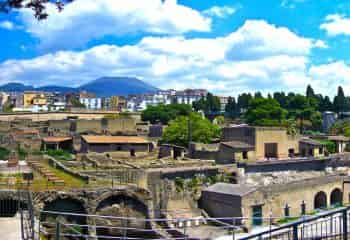