Why not visit Cassino with Evolved Guide? In the long history of Cassino devastation and rebirth have fatally alternatd: immerse in the unique atmosphere of this city of Southern Lazio with our Guided Tours of Cassino!

Not everyone knows that Cassino’s territory, today characterized by mountain valleys, in Pre-historic times was a lake basin. And on the top of the mountain where the Montecassino Abbey, Italy’s most ancient monastery and surely the symbol of the city, stands out today there was since Roman Times a sacred place – a temple of Apollo. With its lush woods and springs, Cassino was so beautiful that its has been chosen by the Romans as the location where to set their out-of-town residences, as testified by the Varronian Baths today lost in the greenery between ponds and streams.

Cassino has been almost completely destroyed by an heavy bombing during the Second World War that has deeply marked the city, but still preserves the Roman ruins and of course the Abbey, which in Middle Ages has been a very important beacon of culture: right here the Benedectine monks have handed down to us illuminated manuscripts with historical information and literary works of the highest interest, otherwise lost forever.

The licensed guides of Evolved Guide have carefully designed for you the best Guided Tours of Cassino so you won’t miss even an inch of what is worth to see! Choose a Cassino and Montecassino Abbey Walking Tour and discover the archaeological area of the Roman city with the theatre and the ‘Casinum’ National Museum, the Abbey of Montecassino founded by St. Benedict of Norcia with its millennial history and the touching war paths of the Second World War.

Remember that our guides are professionally trained local guides, so you’ll know information that normally cannot be found on the Internet on in books because they are part of local stories, anecdotes and traditions.

Each Cassino and Montecassino Abbey Walking Tour is moreover customized by each guide for what concerns itineraries, duration, dates, departure times and prices. Find the perfect one for you and go back home with a unique experience ensured by Evolved Guide!

Most requested Tours of Cassino 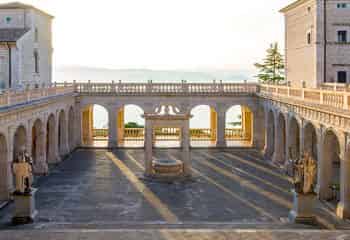 Dominated by the splendid Abbey, Cassino is the city of Lazio you don’t expect. Choose a Cassino and Montecassino Abbey Guided Tour in the company of a professional tour guide >>
Starting from 0,00 €
Price per person 0,00 €