Why not visit Tarquinia with Evolved Guide? Tarquinia rises on a tuff-spur in the warm countryside of Rome and is famous worldwide for being one of the main cities of the Etruscans: get ready to meet it with one of our Guided Tours of Tarquinia!

The Etruscans, the fascinating civilization of Ancient Italy we still admire today for its high level of culture and art, have left in Tarquinia priceless treasures such as the Etruscan necropolis of Tarquinia with its beautiful painted tombs, unique in the world and making wonder every year thousands of visitors. The great Etruscan culture of Tarquinia deeply affected Rome: not everyone knows that the legendary Etruscan kings of Rome (Tarquin the Elder, Servius Tullius and Tarquin the Proud) came from Tarquinia, as well as many religious rites and ceremonies of the Roman world.

From the mid-14th century Tarquinia was dominated by noble families and cardinals: the village of Tarquinia, called Corneto, still retains its medieval appearance with the walls and towers of a fortified stronghold, embellished by a crown of Cosmatesque, Lombard and Byzantine churches.

The licensed guides of Evolved Guide have carefully designed for you the best Guided Tours in Tarquinia so you won’t miss even an inch of what is worth to see! Go for a fantastic travel in time between Etruscans, Medieval and Renaissance lords with a Guided Tour of Tarquinia: explore the Necropolis of Tarquinia and the National Etruscan Museum, discover the hidden curiosities of the lesser-known Tarquinia by visiting the historic centre dominated by the Cathedral and the superb Vanvitelli Palace, and venture into Tarquinia’s territory up to the mysterious Tarot Garden. Otherwise, spend an incredible day in the Etruscan world with a Guided Tour of the Etruscan Necropolis and admire the painted tombs of Tarquinia and Cerveteri and the Santa Severa Castle!

Remember that our guides are professionally trained local guides, so you’ll know information that normally cannot be found on the Internet on in books because they are part of local stories, anecdotes and traditions.

Each Guided Tour of Tarquinia and Guided Tour of the Etruscan Necropolis is moreover personalized by each guide for what concerns itineraries, duration, dates, departure times and prices. Find the perfect one for you and go back home with an unforgettable experience ensured by Evolved Guide!

Most requested Tours of Tarquinia 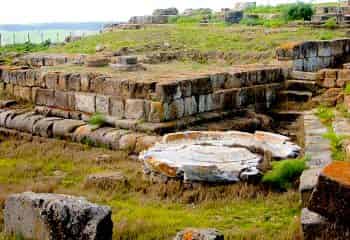 Discover Tarquinia, motherland of the Etruscans: from its sheer walls, your eyes will range from the open countryside to the blue sea. Evolved Guide offers you the chance to book >>
Starting from 0,00 €
Price per person 0,00 €