Why not visit Termoli with Evolved Guide? Termoli occupies a unique position from which, on clear and sunny days, you can admire the Majella mountains on the background as well as the Tremiti islands towards the sea. Choose one of our Guided Tours of Termoli and let its atmosphere hold you!

Termoli’s territory extends between the Biferno and Sinarca rivers, so that according to some people in ancient times the city would have been known as Interamnia Frentanorum, which literally means ‘the land between two rivers’; others argue that the Roman port of Buca was rather located here. It is however certain that the first urban settlement developed on the promontory where today the ancient village rises: It was the Norman counts who began the construction of the castle that still dominates the village, known as the ‘Swabian Castle’ due to the renovations made in 1247 by Frederick II of Swabia.

From the immediate post-war period Termoli saw a development of seaside tourism, but its original heart has preserved the characteristic allyes of a fishing village surrounded by walls. Very fascinating!

The licensed guides of Evolved Guide have carefully designed for you the best Guided Tours of Termoli so you won’t miss even an inch of what is worth to see! Book a Termoli Walking Tour and stroll around the colourful historic centre: try to cross the Rejecelle (the most narrowest alley of Italy), discover masterpieces of architecture and art such as the Cathedral of St. Maria della Purificazione and the stunning Swabian Castle with its towers, and enjoy the view on the port of Termoli with the impressive Trabucchi!

Also remember that our guides are professionally trained local guides, so you’ll know information that normally cannot be found on the Internet on in books because they are part of local stories, anecdotes and traditions.

Each Termoli Walking Tour is customized by each guide on what concerns itineraries, duration, dates, departure times and prices, Find the perfect one for you and go back home with an unforgettable experience ensured by Evolved Guide!

Most requested Tours of Termoli 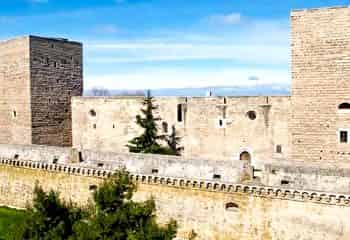 There is a place in Molise where sea and mountain meet in perfect harmony: Termoli, the beautiful coastal town that cannot be missing in your trip. Let our professional tour >>
Starting from 0,00 €
Price per person 0,00 €