Coming on vacation in the southern part of Sardinia you cannot miss an archaeological site as important as that of Nora: explore it with our Nora Guided Tour with an Evolved Guide local tourist guide. Nora was an ancient city on the southern coast of Sardinia. According to tradition, the ancient city was founded by the Iberians led by the hero who then gave the city its name, namely Norace. Based on the historical studies, it was possible to identify traces of frequentation of the site dating back to the Bronze Age. The city was inhabited by the Phoenicians as early as the 8th century BC It is not a coincidence that it was inhabited by the Phoenicians as they were a people from the Middle East and dedicated to trade, therefore the strategic position of Nora, in the center of the Mediterranean, was decisive for its development. After the Roman conquest, which took place in the third century BC, the city became the capital of the Roman province of Sardinia. The great importance of this archaeological site is given by the extraordinary stratification phenomenon that was possible to appreciate following the archaeological excavations: imagine the city as a wonderful history book that you can read and understand together with our local guide who will tell you its history .

On our Evolved Guide platform, Nora Guided Tour is customized by each of our tourist guides according to the itineraries, durations, departure times, prices and offers. Search among the proposals and choose the tourist guide that's right for you.

Most requested Tours of Nora 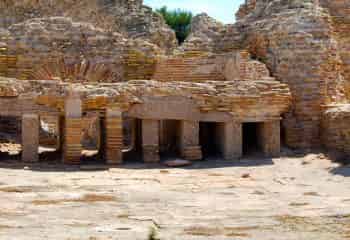 Discover one of the most important archaeological sites in Italy with our Archaeological Park of Nora tour. Our Evolved Guide local guide will make you discover everything about >>
Starting from 0,00 €
Price per person 0,00 €