During your trip in Italy you must see Lecce: discover it with Evolved Guide and with our expert local guides who will take you to its most magical places during an amazon Lecce Guided Tour. Lecce is the eastern provincial capital of Italy and is a city that preserves an extraordinary architectural heritage, so much so that it has been called the Florence of the South of Italy. Most of its buildings are made of Lecce stone, the famous local stone which, depending on the light, it reflects different shades: pink, yellow, white, up to the colors of the sunset. All this is made even more brilliant by the contrast with the blue sky. The city has ancient origins, even more ancient than Rome, which date back to the third millennium BC.

Its most famous buildings, such as the Cathedral of Lecce, are characterized by the style of the Lecce Baroque, a whimsical architectural style, which capture the attention of the observer and allowed to bring his look to the sky. This city will amaze you with its extraordinary buildings, belonging to different historical periods. Baroque architecture in fact mixes in an incredible way with the Roman one, testified by the theater and the amphitheater, dated in the first centuries of the Empire.

Explore its splendid alleys, where you can breathe the daily life of the city. As you know in fact southern Italy is an extremely hospitable place and here you will feel at home. Furthermore you will have the opportunity to know many curiosities that only the inhabitants of Lecce know because our guides are local. So you can enjoy this unique experience even more.

On our Evolved Guide platform, the Lecce Guided Tour is customized by each of our tourist guides according to the itineraries, durations, departure times, prices and offers. Search among the proposals and choose the tourist guide that's right for you. Go home with a unique experience: choose Evolved Guide.

Most requested Tours of Lecce 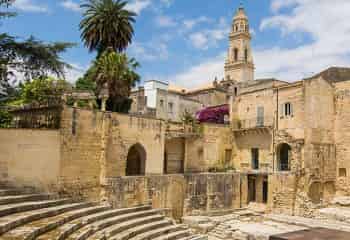 In the splendid Salento there is a city you absolutely must see: Lecce. The so-called “Lady of the Baroque” will enchant you with its mix of Roman and Baroque >>
Starting from 0,00 €
Price per person 0,00 €