Are you ready to leave for an exciting journey to discover one of the most incredible cities in the world? Palermo is just waiting for you. Together with our Evolved Guide certified local tourist guide you will explore the secrets of the wonderful city, capital of Sicily, with the Palermo Guided Tour.
«Beautiful and immense, the largest and most exalted metropolis in the world, seat of kings in modern and ancient times. Palermo has buildings of such beauty that travelers set out to admire them» as Muhammad al-Idrisi, an Arab geographer and traveler, defines it.
A thousand years later the city has undoubtedly changed but its splendor has remained unchanged: it is still possible to see the Arab influence, especially in its architecture and in its daily life.
Explore with your guide the city of Palermo, founded by the Phoenicians and particularly loved by the Greeks, so much so that its name is of Greek origin: Palermo in fact derives from Panormos, that is "all port". With the Arab conquest, Palermo became a large market, positioned in the center of the Mediterranean.
Among the most important monuments of the city you must absolutely see the Cathedral of Palermo: it is the most visited monument, probably due to the presence of the royal tombs, including that of Frederick II of Swabia. Another important monument of the city is the Palazzo dei Normanni, the oldest royal residence in Europe. Inside the splendid building there is the wonderful Palatine Chapel, the private chapel built by Roger II and a place of representation. The central figure is the Christ Pantocrator, the one who can do everything: this image is the most common representation in the Sicilian Arab-Norman churches present in the main churches of the area (Palermo, Monreale and Cefalù).
If you have time, we also recommend a visit to the beautiful Castello della Zisa, a splendid palace surrounded by the lush garden, which was to serve as the summer residence of the kings.
But Palermo is not just art: discover its perfumes, its food and wine in the traditional markets of Vucciria and Ballarò, where you can taste the most important dishes of Palermo cuisine.
On our Evolved Guide platform, the Palermo Guided Tour is customized by each of our local guides according to the itineraries, durations, departure times, prices and offers. Search among the proposals and choose the tourist guide that's right for you.

Most requested Tours of Palermo 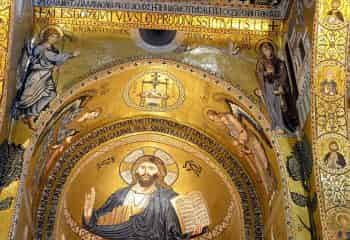 Are you in Palermo? Then you can’t miss our Palermo Walking Tour. Together with our Evolved Guide local guide you will explaine to you the history of the main monuments of >>
Starting from 0,01 €
Price per person 0,00 €

Take part in our Monreale Cathedral guided tour. Together with our Evolved Guide local guide you will discover the magnificent city and its Duomo. A few kilometers far from >>
Starting from 0,00 €
Price per person 0,00 €