Sicily is the place where you can see the best expression of the union between montagna and sea and Catania is certainly an emblem of these two natural elements: explore it with our Catania Guided Tour. Catania has an ancient soul, its memories are linked to the murmur of the waters and to the power of fire. To the north there is the fire that dwells in the bowels of Etna, to the east the sea and to the south and west the earth. Catania is the oldest Greek colonization in Sicily, in fact it was founded in 729 BC, and it was chosen for its strategic position as it is characterized by a natural port and a soil morphology suitable for fortifications. The elephant city is ready to enchant you with its wonders. First of all, the Cathedral of Sant'Agata, a Unesco World Heritage Site, built between 1078 and 1093 and created to preserve the remains of the saint, who became the patron saint of the city. Inside the church, among the many burials, there is that of an exceptional citizen of Catania: Vincenzo Bellini, the famous nineteenth-century composer.
The city in Roman times lived a period of great prosperity: in fact it was equipped with a theater, an amphitheater, a hippodrome, the spas and temples that can be admired on its streets.
But surely what is most striking in Catania is the grandeur of its mountain, Etna, the highest active volcano in Europe, which dominates the city: discover its magical atmosphere with our Etna Guided Tour. Together with our local guide you will walk along its paths and you can admire its beauty up close. Our multilingual volcanological guide will accompany you on this exciting trekking.
On our Evolved Guide platform, the Catania Guided Tour is customized by each of our local guides according to the itineraries, durations, departure times, prices and offers. Search among the proposals and choose the tourist guide that's right for you.

Most requested Tours of Catania

Are you an adventure lover? Do you love hiking? Etna is just waiting for you! Come and discover the highest active volcano in Europe, declared a World Heritage Site by Unesco, >>
Starting from 15,29 €
Price per person 1,53 € 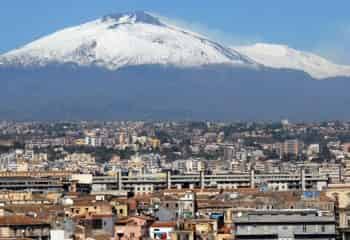 Do you want to discover the true face of Sicily? Take part in a Catania Walking Tour and immerse yourself, with a certified local guide, inside one of the most beautiful cities in >>
Starting from 0,00 €
Price per person 0,00 €