You will be amazed by the beautiful city of Agrigento, in the heart of Sicily. With our Evolved Guide certified tourist guide you will discover the whole history of ancient Àkragas, the ancient name of the city, during the Agrigento Guided Tour. Akragas was founded by Greek colonists from Crete and Rhodes in 480 BC. and it was a city full of sumptuous buildings and splendid temples. Pindar even described it as "the most beautiful city of mortals". The grandiose temples that stood on the perimeter of the city walls remain testimony to its ancient glory: for those who looked at the city from the coast, the temples must have seemed a sign of strength, wealth and military power.
The ancient city was very large, over 450 hectares, and in its heyday more than 500 thousand inhabitants lived here. Its favorable position contributed to making it one of the most important cities in the Mediterranean: Agrigento was 4-5 km far from the sea and it was located on the hills, so it had a strategic position. The beating heart of Akragas was certainly the Valley of the Temples, among the most important archaeological sites in Italy and in the whole world. Together with our local tour guide you will explore the wonderful Valley of the Temples and you will learn everything about the past of this ancient city.
Agrigento is not only ancient history: it was also the birthplace of Luigi Pirandello, the great writer and playwright, who was awarded the Nobel Prize for literature in 1934. To discover the modern city, after your tour of the Valley of the Temples, you could do a walk in its historical center and you will realize how much the citizens and monuments of the city are attached to the figure of Pirandello. For the sweet tooth then a mandatory stop is absolutely the tasting of ice cream and its typical desserts that you will not find anywhere else. If you have an extra day, Evolved Guide also suggest you to see the enchanting scenery of the Scala dei Turchi, the splendid white coast carved by the wind and the sea which is reflected in the crystal blue of its sea.
On our Evolved Guide platform, the Agrigento Guided Tour is customized by each of our local guides according to the itineraries, durations, departure times, prices and offers. Search among the proposals and choose the tourist guide that's right for you.

Most requested Tours of Agrigento

Valley of the Temples Guided Tour 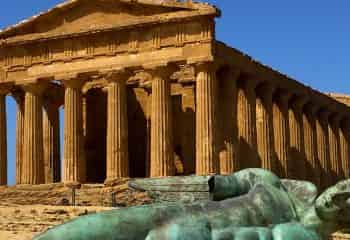 Discover the thousand-year history of the wonderful city through our Valley of the Temples Guided Tour: our Evolved Guide qualified tourist guide, registered with the Sicilian >>
Starting from 0,00 €
Price per person 0,00 €

The best Guides of Agrigento