Bern and its Old Town, recognized as UNESCO World Heritage Site, is the most visited city in Switzerland. With its brightly coloured palaces, medieval streets still well preserved, monuments and hundreds of fountains that attract thousands of people, Bern is the first destination to visit as soon as you arrive in Switzerland.

The city has a high concentration of architecture, culture, nature, efficiency, vitality and quality of life. For this reason, it is one of the most popular cities to live in and visit.

The city is characterised by numerous representations of bears in all its streets, of all types and all forms. Another fundamental aspect that characterises the city are the numerous fountains. In the city there are more than 100 fountains, but 11 have preserved the original charm of the sixteenth century. The most important one is the so-called Fountain of the Ogre, an impressive fountain where an ogre is represented devouring a child with a reference to the god Kronos (a Greek god).

In the city of Bern you can admire the clock tower, symbol of the city. All this and much more makes Bern a popular destination and visited by thousands of people from all over the world.

Join a Guided Tour of Bern, so as to discover one of the most beautiful cities in Europe together with a local guide.

Most requested Tours of Bern 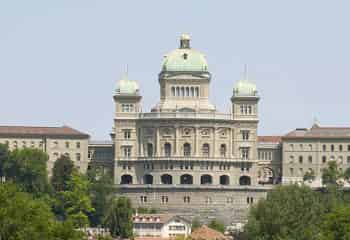 Discover the capital of Switzerland by joining the Bern Walking Tour. Walk through the Old Town together with an expert local guide and get to know the history and curiosities of >>
Starting from 0,00 €
Price per person 0,00 €