Visit Pompeii, the city of Campania, by joining a Guided Tour of Pompeii among those proposed by the authorized local guides of Evolved Guide.

The Ruins of Pompeii are known for being the testimony of what once was the ancient city of Pompeii, which was buried under a blanket of pyroclastic materials following the eruption of Vesuvius in 79 BC.

There were found significant traces that testify the presence of an important city center since the sixth century BC, following the conquest by Cuma: It was a disordered and spontaneous aggregation of buildings.

Among the most salient events regarding the construction of the ancient city of Pompeii there are two main events. The first was the battle lost by the Etruscans against Cumans and Siracusans, in which Pompeii passed into the hands of the Samnites, who built tuff walls. The second was the Samnite wars against Rome, which determined the conquest of Pompeii by Rome. It was under the Romans that the first regular urban layout of the city took place.

The Archaeological Excavations of Pompeii are the third most visited State Museum Site in Italy after the Pantheon and the archaeological circuit of the Colosseum, Roman Forum and Palatine Hill. Thanks to a private walking tour of the archeological site you will discover the history behind the well-preserved ruins thanks to the commentary from an authorized local guide, who will also help you understand the customs and traditions, eating habits and the art of the inhabitants of the ancient Pompeii through some finds.

Choose Evolved Guide, the only platform where all the guided tours in Pompeii are customized by our tour guides. Choose the tour depending on the itinerary, duration, departure time, price and offers. Evaluate the various proposals of our tour guides and choose the option that's right for you! Come home with a unique memory of the private tour of Pompeii thanks to the Evolved-Guide Authorized Private Guide.

Most requested Tours of Pompei 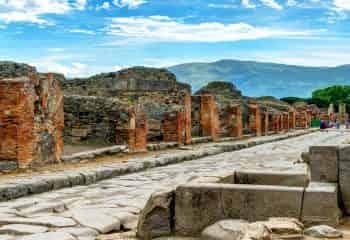 When a tourist decides to go on holiday in Campania, Pompeii is a must–see archaeological site. Discover Pompeii by joining the Archaeological Excavations of Pompeii Guided >>
Starting from 0,00 €
Price per person 0,00 €