The Olympic Games are a sporting event with an ancient origin: if you want to experience the emotions of the athletes, choose Evolved Guide and Olympia Guided Tour. You should know that these were not simple sport competitions: the life of the Greeks was marked by this event and the whole world stopped for a few days. During this period you could not declare war on your enemies (the so-called Olympic truce). Furthermore, these are Pan-Hellenic competitions, so they were reserved for all Greek citizens. The first edition took place in 776 BC. and, after this date, they replicated every four years, exactly as it happens for modern games. As for the disciplines, running, boxing, fighting and competitions with horses and pentathlon were practiced, therefore a competition in which five disciplines alternated (running, javelin throw, discus throw, long jump and fight ).

Inside the archaeological site there are many monuments to see and discover. What you cannot miss is the temple of Zeus, where it was possible to admire the large chryselephantine statue (make of gold and ivory), depicting Zeus and sculpted by Phidias. It was one of the Seven Wonders of the ancient world and is now lost. The temple at Zeus is one of the first examples of monumental temples in Greece.

Find out what the typical day of an athlete or spectator was like. Here there was also the gymnasium of the second century BC: it was a courtyard with 4 stoà (porches); in the courtyard athletes trained for running competitions, discus throw and javelin. There is also Philippeion 338 BC monument built by Philip, father of Alexander the Great.

You will be speechless as much will be the wonder as you will see the large stadium that hosted the spellings. And don't forget to visit the splendid Archaeological Museum which houses some of the greatest masterpieces of ancient art. If you don’t want to miss the best of Olympia choose the Ancient Olympia Walking Tour.

On our Evolved Guide platform, the Olympia Guided Tour is customized by each of our tourist guides according to the itineraries, durations, departure times, prices and offers. Search among the proposals and choose the tourist guide that's right for you.

Most requested Tours of Olympia 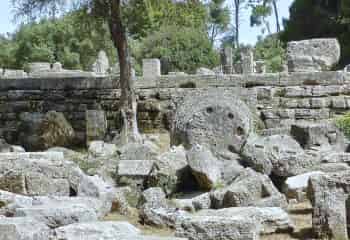 Enter the stadium like a true Olympic athlete with the Ancient Olympia Walking Tour. An Evolved Guide local tourist guide will tell you the whole story of one of the most >>
Starting from 0,00 €
Price per person 0,00 €